Wolves Bounce Back from Extinction in Delanta - Part 1

Delanta is a small isolated Afroalpine flat south of Abune Yosef and Aboi Gara, home for 16-19 estimated wolves before 2016. Human settlement, farming and the encroachment of domestic animals, especially dogs, caused a canine distemper outbreak in 2017 that sadly decimated all the wolves of Delanta. After this disastrous event EWCP continued monitoring the habitat remotely with Wolf Ambassador Esubalew Milashu, hoping the area could serve as a potential wolf reintroduction site in future. Our Wolf Ambassadors are members of the community that act as ears and eyes in remote areas that are difficult for us to access regularly.

Last year I got a phone call from Esubalew with news of a single wolf sighted in the area. I sent our Abune Yosef wolf monitor Desiew Gelaw for short visit to confirm the news and, after five days of intensive wolf sighting effort, he and the Wolf Ambassador reported sighting a pair of adult wolves three times.

Two months after their last visit I was eager to see the two wolves myself and to monitor the entire habitat in case any new wolves appeared. I had visited Delanta twice but my last visit was in 2011 before I left to study in the UK. In this third visit I sadly saw a lot of predicament in Delanta, more so than any other mountain range in Ethiopia. The agriculture and settlement frontier reaches the top of the mountain at 3800m above sea level, livestock graze freely and domestic dogs hunt rodents, competing directly with wolves and jackals for food. The wildlife of the habitats; wolves, jackals, gelada baboons and others are in a serious agony due to human-induced plight.

Frustrated with all these problems, I started leading my monitoring team to search for wolves within the remaining habitat. The number and densities of dogs and livestock, mainly sheep and goats, was great and could potentially affect whether wolves can survive in this ecosystem. Luckily, we saw two adult wolves with six puppies together at a place called Atse Gedel near Wotet Meda. Assuming the adults are a mating pair we gave them the nicknames Atsew and Wotetie, which literally mean Emperor and Milky respectively in Amharic, and I proposed naming the family the Atse Gedel pack.

Now the question is what can be done to save these strikingly handsome creatures? It is a pressing challenge to do more to ensure the conservation of this awesome landscape and its endemic flora and fauna, epitomised by the Ethiopian wolf. Watching them repeatedly at usual locations, playing games like “hide and seek”, it is ecstasy for the watcher as well as the wolves. Sadly they will be agonised soon again with canine distemper and rabies contracted from dogs living closely with them, unless we take swift measure on all fronts. 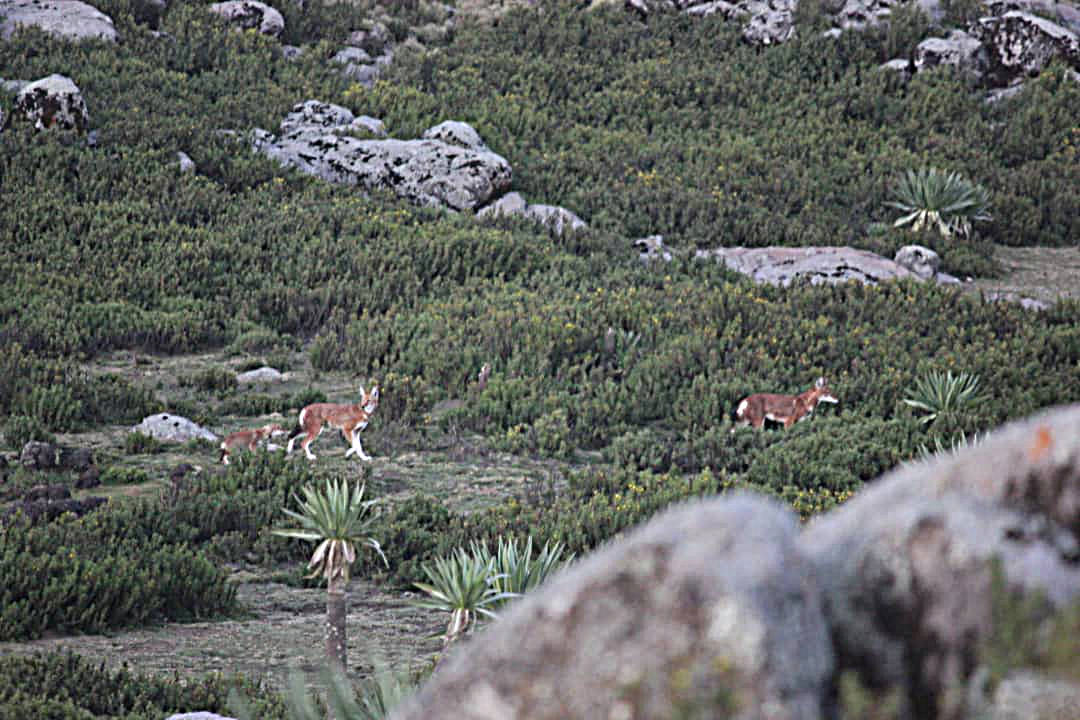