Student research: on dogs and wolves

Last year we were joined by a number of MBiol students from Oxford University who used EWCP data to complete a year-long research project. One student, Naomi Hawrylak, conducted her study on the nature of interactions between wolves and dogs and is excited to share her interesting findings below:

During my Master’s project with the EWCP, I was given access to an enormous wildlife sightings database with sightings dating back to 1988 from Bale Mountains National Park (BMNP). I was particularly interested in the wolves’ interactions with domestic dogs, which as we know can encourage the transmission of rabies and CDV. However, in my project, I wanted to look at a different aspect of these interactions: their behaviour. What percentage of these interactions are aggressive? Which species is the instigator of aggressive behaviour? And what variables affect whether these encounters occur at all?

From the wildlife sightings database, I extracted all sightings which involved at least one Ethiopian wolf and one domestic dog, and classified them according to the behaviour displayed by both species during the encounter (aggressive, affiliative or neutral). Where the encounter was aggressive, I also determined which species was the instigator of the behaviour, or the more aggressive of the two. 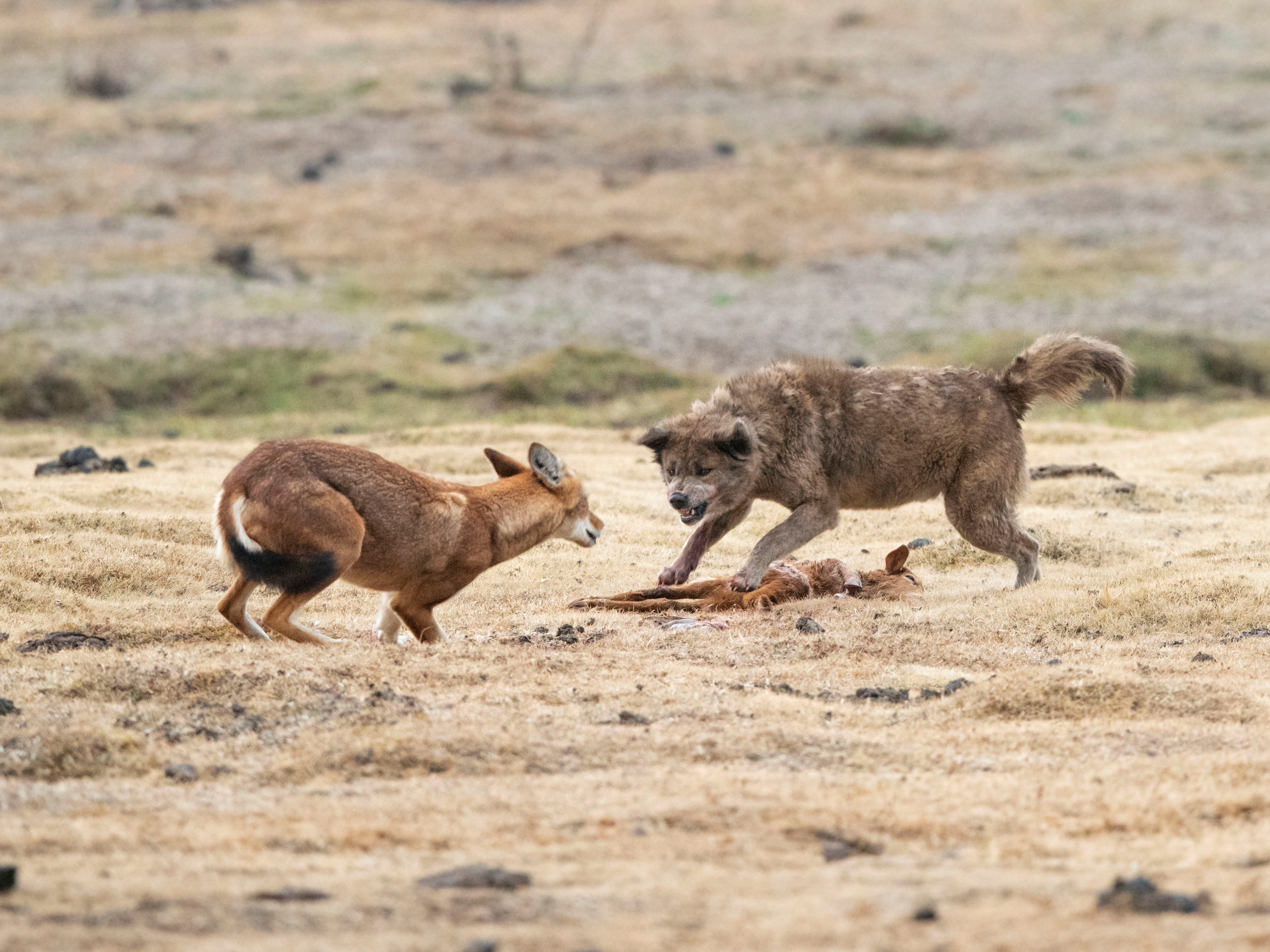 In contrast to previous studies, I found that the majority of encounters were aggressive (60%), which was far higher than previous estimates. Aggressive behaviour most commonly involved chases, rather than direct aggressive contact, such as fighting or biting. Interestingly, both wolves and dogs were equally responsible for instigating the aggressive behaviours, not just dogs. Even so, aggressive chases (instigated by either species) have the potential to disrupt Ethiopian wolf foraging behaviour, by displacing them from their current foraging patch. Disruption of their normal foraging activity could reduce the number of prey items wolves are able to kill, with knock-on effects for any dependent pups.

Another interesting result was that numerical superiority – that is, having more individuals in one species’ group than the other species’ group – was able to predict the aggressor in wolf-dog encounters. So, as an example, if there were 6 dogs and 2 wolves engaging in an aggressive encounter, the dog group was more likely to be the most aggressive group, or “win” the encounter. This suggests that dog groups, rather than individuals, are likely to disturb or harass wolves the most, particularly when wolves are travelling alone as they do when foraging.

A further finding was that wolves and dogs were more likely to encounter one another during particular hours of the day. Encounters were most likely between 10:00 and 15:00, and peaked between 12:00 and 13:00, which coincides with the prime foraging hours of Ethiopian wolves. Encounters were far less likely to occur before 09:00, which follows from the behaviour of dogs, who only leave their villages accompanied often by people and livestock at around 09:00. Since wolves rarely venture into villages themselves, encounters are most likely once dogs are permitted to roam into their Afroalpine habitat. Confirming this, I also found that encounters were not any more likely to occur near to villages than elsewhere, suggesting that dogs are likely to range far beyond their villages into optimal wolf habitat. The implications of these findings are that encounters with dogs are likely to disrupt wolf foraging behaviour, since encounters are concentrated around the prime foraging hours for wolves, when their rodent prey is most active. 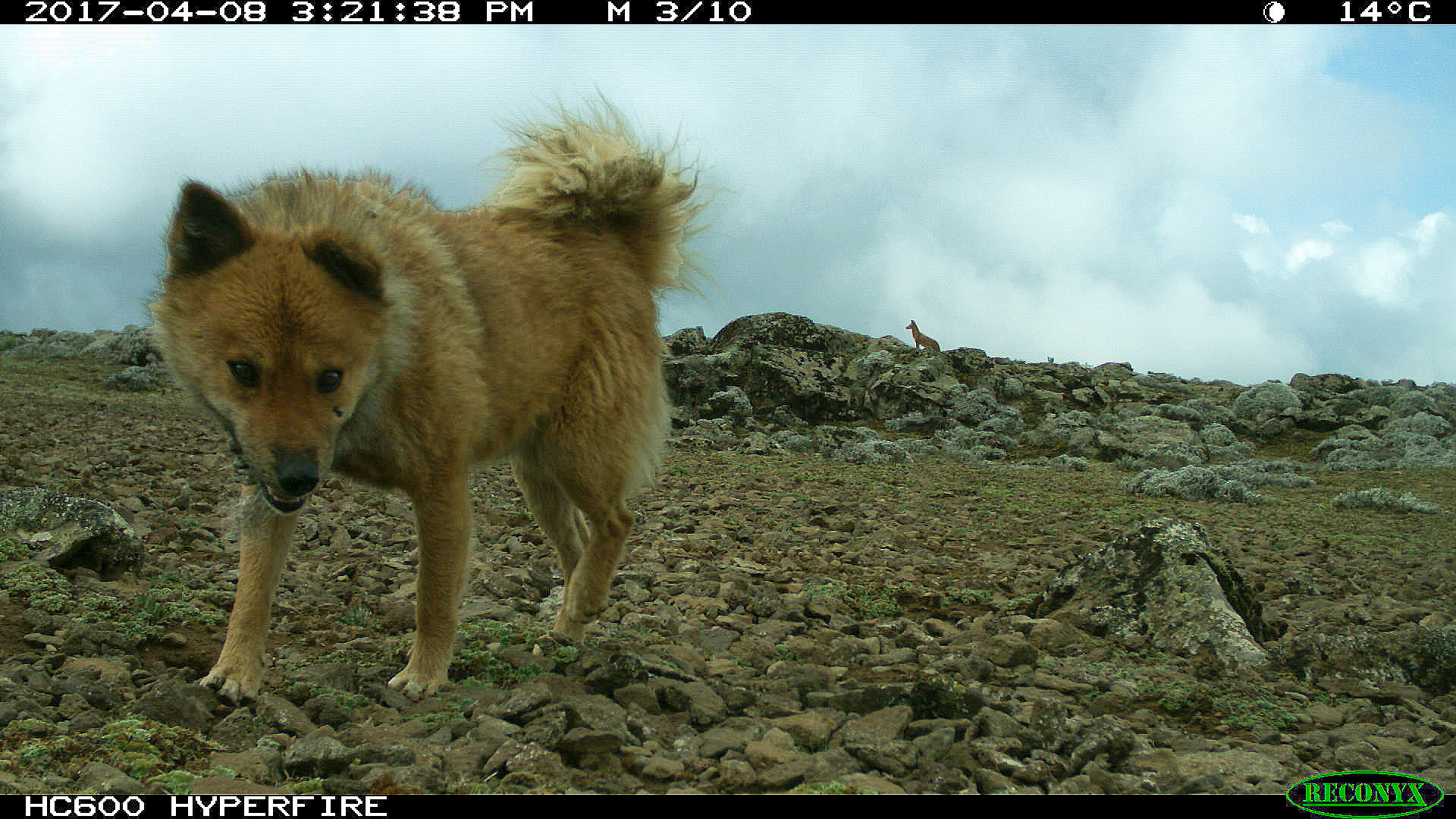 The unexpectedly large amount of aggressive behaviour found in my research adds to the wealth of evidence that dog presence in BMNP has negative effects for wolves. This in addition to encounters peaking during key foraging hours for wolves, leads me to recommend that BMNP management further enforces regulations preventing pastoralists from allowing their dogs to roam freely into wolf habitat, particularly in the hours around midday where wolves’ foraging opportunity is greatest.

The results of this Master’s project were shared by EWCP's Science Director Jorgelina at the symposium of the Large Carnivore Survey of Ethiopia in May 2022. My thanks go to Beth Preston and Jorgelina Marino for their guidance and support during my project.