Ethiopia has no shortage of charismatic animals. From the small and strange giant headed mole rats to the elegant mountain nyala, the highlands are home to many captivating mammals. Among the more elusive is the leopard – but thanks to our camera traps, we still have the chance to “spot” them.

We were lucky enough to have this leopard come across our camera early one morning in the mountains of Abune Yosef, home to the Rim Gedel, Qey Gedel and Atimata wolf packs. This massif is one of the largest Afroalpine areas in Northern Ethiopia so it’s no surprise that the area’s bordering forests are attractive to these adaptable big cats, which can often be found near prime wolf habitat. It’s very rare to see the two species cross paths, but our monitors recently saw a wolf pack amazingly chase away a leopard!

Leopards are widely distributed across sub-Saharan Africa including Ethiopia, though in low densities. They are still found throughout most of their historic range, including in some of Ethiopia’s protected areas, although their numbers have been significantly reduced over the last hundred years with increasing human population expansion and habitat loss. 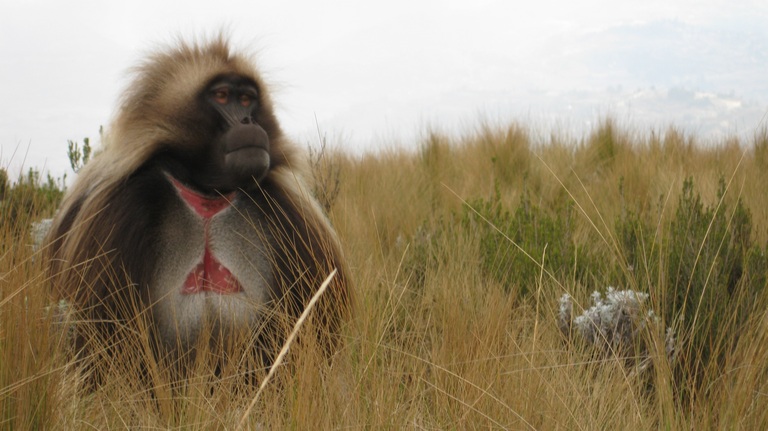 Masters of camouflage, leopards aren’t too picky about their diet and feed on a broad range of prey including small rodents, birds, and various species of ungulates (hoofed mammals) - they have even been observed hunting gelada baboons in Menz-Guassa. As they spend so much time in the mountains, Wolf Monitors spot leopards fairly regularly around remaining patches of forest, and have recorded 29 sightings in the last two years. This year, EWCP’s Monitoring Team Leader Alo Hussein has even seen a melanistic leopard (sometimes referred to as a black panther) twice in remote forest groves near Bale Mountains National park, home to the largest population of Ethiopian wolves.

In Ethiopia’s highlands, leopards depend on the montane forests of the Afroalpine ecosystem, for which Ethiopian wolves are a flagship – when we safeguard habitats as a home for the wolves, many other species, including leopards, benefit.