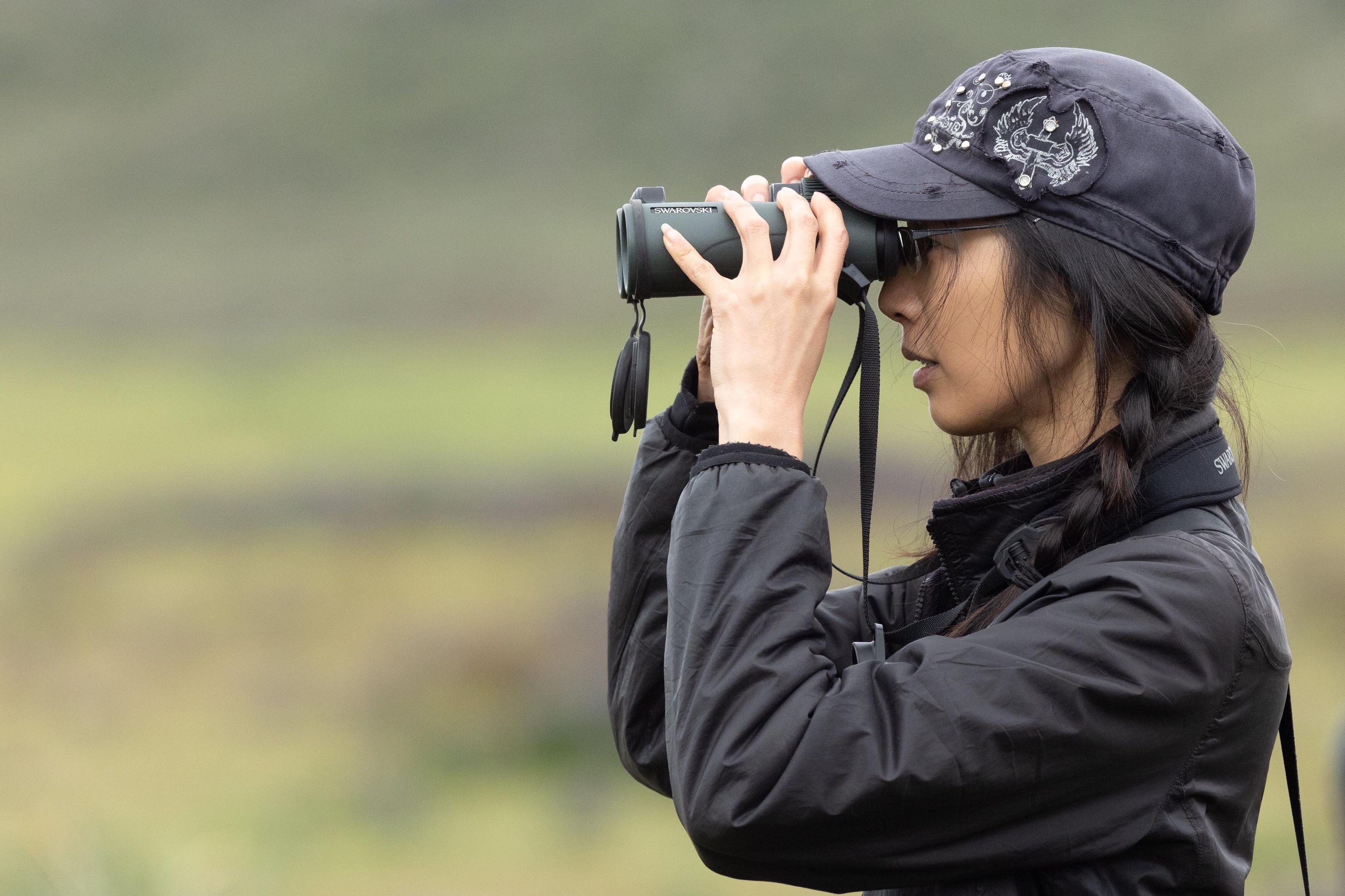 When I described my new position in EWCP and mentioned that I would be going to Ethiopia to work on Ethiopian wolves, my friend Emilie exclaimed: “oh! so you are a biologist studying an endangered species in a war zone!” I froze… Was that really what I would be doing? Technically, yes, the Ethiopian wolf is classified as “Endangered” and indeed, Ethiopia is currently having some conflicts… so she was correct in a sense. What would the reality be like over there?

For my first time to Ethiopia, I travelled with Prof. Claudio Sillero, EWCP’s founder and director. In Addis Ababa, we met Eric Bedin, EWCP’s field coordinator, who would take us to the Headquarters in Dinsho. On the long road from Addis Ababa to Dinsho, despite the relatively good asphalt lane connecting town after town, it was sometimes hard to make way. We shared the road with herds of cows, sheep, and donkeys, as well as “garis”(colourful horse-drawn cart taxis) and dozens of small, eclectic 3-wheeled blue “Bajaj” (motorised version of the garis) that obviously didn’t seem to be following the same rules as regular cars...

In southern Ethiopia, signs of conflict in the country were only noticeable through the presence of multiple “checkpoints” along the road, where armed military guards asked us who we were and where we were going. One look at our “ferengi” (foreigner) faces and they let us through. As we crossed the Arsi region, Eric pointed at the mountain range and said: “on top of that is wolf habitat.” Far on the horizon, the smooth mountain top appeared slightly coppery. I immediately noticed the very stark demarcation line between “wolf habitat” and the vivid green barley fields growing on the gentle slopes. Right there, it struck me how much the wolves were trapped up there, pushed back as these crop fields continue to creep up to the top. Being Afroalpine specialists, they cannot make it in any other habitat. Nowhere to escape...

We finally reached Dinsho at night, exhausted. The EWCP Headquarters are inside Bale Mountains National Park, a few hundred meters from Dinsho. It is a lovely terraced wooden house nestled in a quiet, forested area. Ethiopian food and traditional coffee were awaiting us, prepared in advance by Fikre and Fosiya.

The following morning, Alo Hussein, the wolf monitor leader, took me on a walk in the park. We hiked up and down a small hill, encountering shy mountain nyalas hiding behind trees or bushes, reedbucks resting in a clearing and a few families of warthogs. It felt like a place from a fairy-tale, full of old juniper trees with branches cascading down like waterfalls and gnarly trunks of African redwoods covered in emerald-green moss and ferns. Below the forest cover, narrow animal tracks meandered between lichen-covered rocks, bursts of sunset-coloured Kniphofia flowers (torch lilies) and carpets of Abyssinian verbena florets. The air was full of bird trills. When I asked Alo what his favourite species were, he immediately replied “Ethiopian wolf. And mountain nyala.” Then his eyes twinkled as he added “But I really like carnivores. I have been watching them all my life.” I was impressed by his dedication. Like Alo, many of the members of the EWCP staff have been here since the very beginning, more than 30 years ago. Edriss Ebu, the current EWCP manager, started as a field assistant when he was only 15 years old. 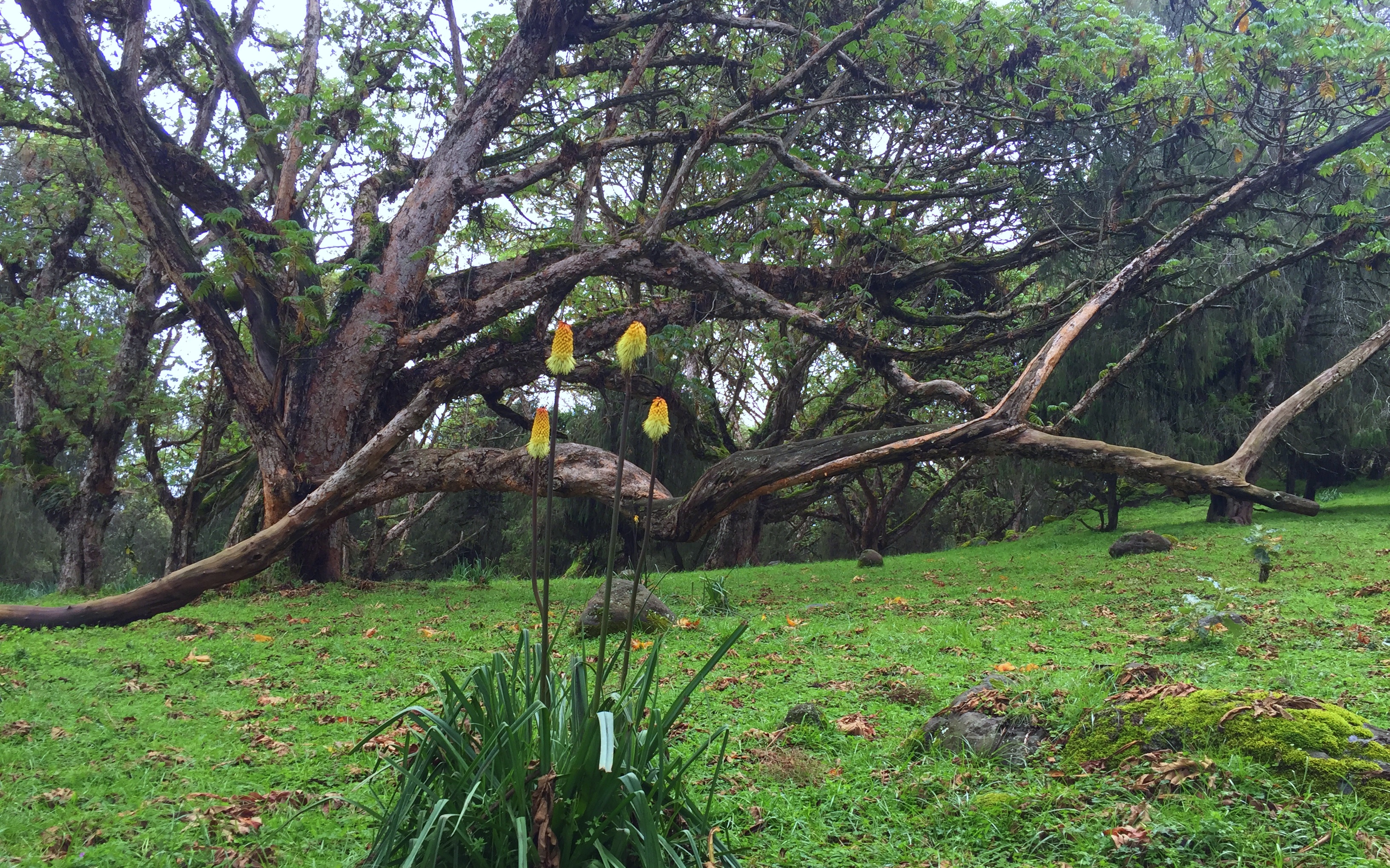 A few days later, we travelled to the Sanetti plateau, one of the two important study areas for Ethiopian wolves in Bale Mountains National Park. As we drove up, trees became scarcer and the vegetation changed… at 3200 m, we were in the Afroalpine biome. First, evergreen Erica moorlands, then more and more round bushes of frosty blue-grey Helichrysum, and finally the Afroalpine meadows and grasslands: short grass, lichen, moss and a few scattered bushes among rocks and boulders. Here and there, the endemic giant lobelias stood out in the landscape like slightly odd-looking palm trees. Tension rose in the car as Claudio anxiously scanned the landscape for wolves, but also for signs that the pressure on these lands increased: more horses and cattle grazing, more dogs, so much more rubbish along the road…

At Sanetti camp, there was a small concrete building and a longdrop toilet, and that was it. We slept in tents. From there, wolf monitors usually go out at 6:30 a.m. every day to search for wolves. The sun is barely rising behind the mountains when they leave. “It’s tough work,” Eric told me. I understood why right away. The air was cold and damp, since we were still in the rainy season, and wind was steadily sweeping through the place. When I entered my tent at night, the flysheet was frozen stiff.

For the next 2 days, we scouted the area for good places to set up camera traps for estimating wolf abundance. Alo navigated the landscape perfectly without a GPS. He knew every cliff, every lake, every rock, every corner of Sanetti. Alo and Claudio brought us to old dens, told stories of individual wolves, remembered wolf packs that thrived, struggled or were wiped out by rabies during these past 3 decades… My heart was beating slightly faster because of the high altitude that I was not used to and the cold wind kept biting my cheeks. As I walked across the misty landscape with giant lobelias towering in the background, I wondered what it feels like to have dedicated your whole life to ensure that one species remains on this Earth. In spite of the harsh conditions, Alo and other wolf monitors diligently keep going back to the highlands to observe wolves again and again, reporting crucial information every time. They are at the very front row, witnessing the birth of each new generation of wolf pups or alerting vets of any suspicious death that could announce a disastrous rabies or canine distemper virus outbreak. Through any political situation, they always continued. Thanks to the tight community network, they are informed of areas where there is unrest and avoid them. When all is clear, they resume monitoring. I strongly felt that, way more than a newbie like me, it was them who were the real people “studying an endangered species in a war zone.”

I came back to Oxford after 3 weeks. During my time there, I saw Ethiopia as a magnificent country, with a unique wildlife and vibrant culture, but also as a country where so many struggles were intertwined… a struggle to maintain a decent livelihood in a fast developing country, a struggle for national identity when so many different ethnic groups – each speaking a different language – co-exist together, a struggle to keep safe places for Ethiopia’s exceptional wildlife when the ever-increasing population also needs space to build new houses, more firewood to cook, more grasslands to feed their cattle… Can Ethiopian wolves keep their place in all of this? In the Strategic Planning for Ethiopian Wolf Conservation (IUCN/Species Survival Commission, 2011), one sentence summarises EWCP’s mission: “It is a difficult balancing act that must be careful not to compromise conservation over development, as the two must go hand in hand.”

What’s next? The Ethiopian wolf families that I saw in Sanetti and briefly in the Web Valley are now getting ready to start a new breeding season. I hope to return the Ethiopian highlands in late January or February, to be alongside wolf monitors when pups come out of their dens for the first time. A new beginning. It will take me time to understand all the intricacies of Ethiopian wolf conservation and research, from external funding to local capacity building. But I think it starts by connecting over the same feeling of wanting something to persist.