At the peak of the rainy season the EWCP team have been busy in the highlands of Delanta in North Wollo. Until recently one of the epicentres of the war, signs of fighting are still evident. Particularly in the nearby Gashena town, a strategic location at the crossroads to three main cities, taken and recovered three times at the cost of many lives.

Also everyone in the team have faced insecurity and concerns for the safety of family and friends over the past year. Their determination to resume work as soon as it was safe to do so is admirable. With a short window of time for planting guassa and transferring bee colonies before the end of the rains, they felt the urgency to kick start the EWCP’s sustainable livelihoods projects in Delanta.

The native guassa grass (Festuca spp.) is used for roof thatching, to make ropes and mattresses, for the coffee ceremony, and as fodder. In August, the team had helped many local farmers planting guassa in eroded agriculture plots bordering the wolf range in the nearby Abuna Yosef range. Cultivation of the guassa stops soil erosion and restores Afroalpine habitats. Two years from now, they will harvest the grass, and once their own needs are covered sell the rest at high price in local markets

But when the team arrived in Delanta, the rain was so copious that most fields were waterlogged and sadly planting had to be postponed. Luckily, on a window of benign weather they could helped Mareg Kasaye plant guassa in their family plot.. 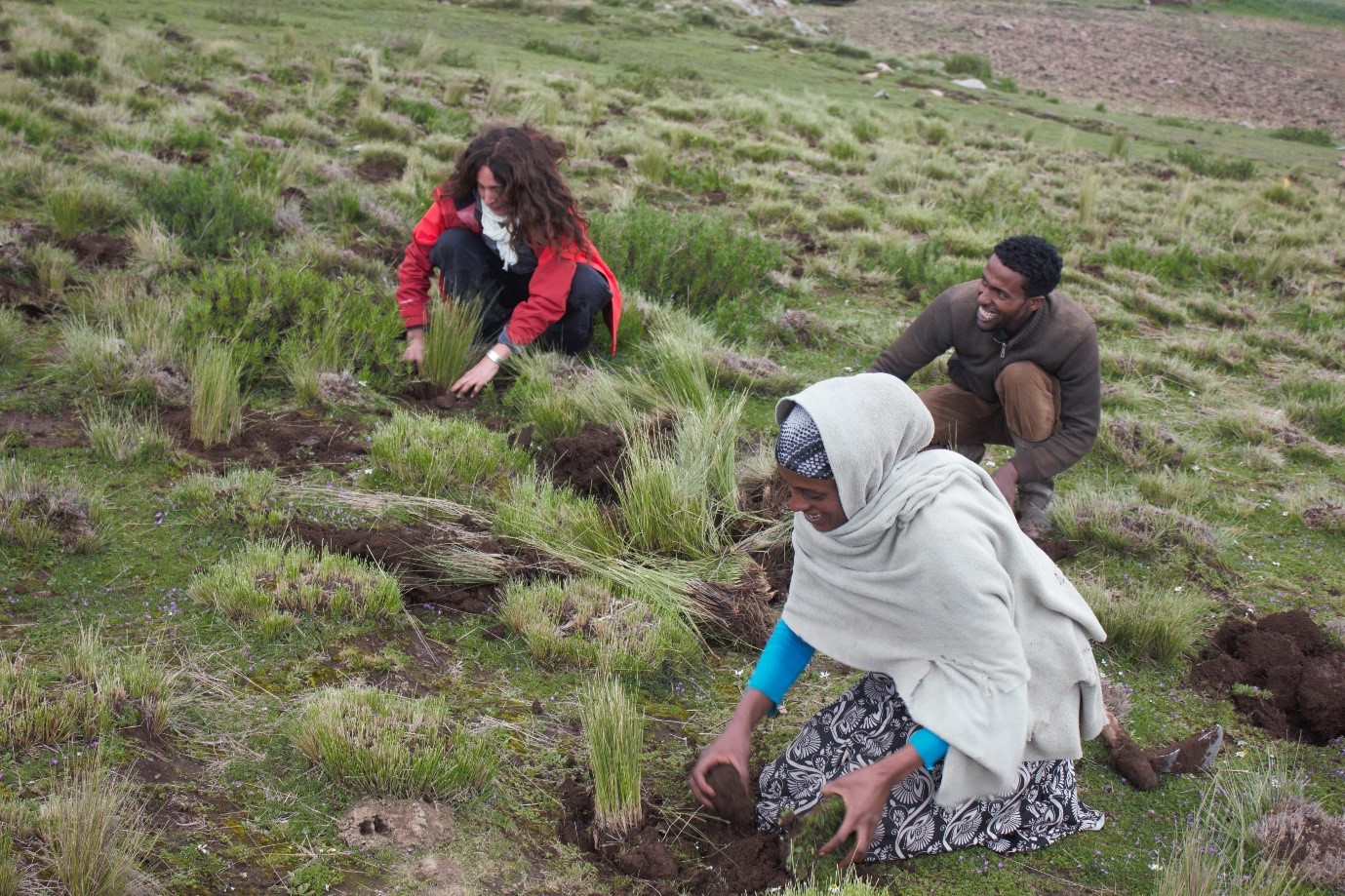 Mareg’s father had planted this plot with guassa 14 years ago. As a result, soil quality was excellent but the old tussocks were dying off. A decision was taken to plant new propagates in between the old tussocks and to establish an experimental plot for long-term cultivation of guassa

Another product that commands high prices in local markets is Erica honey. Soon several families in Delanta will start deploy bee hives honey in the high altitude Erica forests bordering wolf range. This time, the team met some of the future honey producers and together selected an ideal location for their beehives. Next, EWCP will provide them with modern beehives, technical training and supervision. These communities are now developing their own bylaws to protect the forests linked to the production of Erica honey.

The outstanding meadows in Delanta are home to the Addis Tesfa pack, which means New Hope in Amharic. This is because, following a locally extinction six years ago, a pair colonised the area and has bred for three consecutive years. During this trip, the team could confirmed that at least seven wolves are alive and, to add to the excitement, heard reports of a pair of wolves in a nearby habitat patch. Are these Addis Tesfa dispersers starting a new family? The monitors will soon check this out.

After the trip the team discussed at length the perilous condition of the Delanta wolves, cornered by new encroachment, some of it illegal, which sadly perpetuates a loop of unsustainable agriculture and poverty. To help these wolves to reign in Delanta for many more years, EWCP has a plan. This include scaling up these sustainable livelihood schemes, research on the restoration and carbon sequestration potential of guassa cultivation, and help with the creation of a Community Conservation Area in Delanta, the only Afroalpine range not yet under legal protection. With support from key members of the local community, the time is ripe and there is some urgency. Unless the current rate of habitat lost is halted this budding wolf population may will again go extinct. 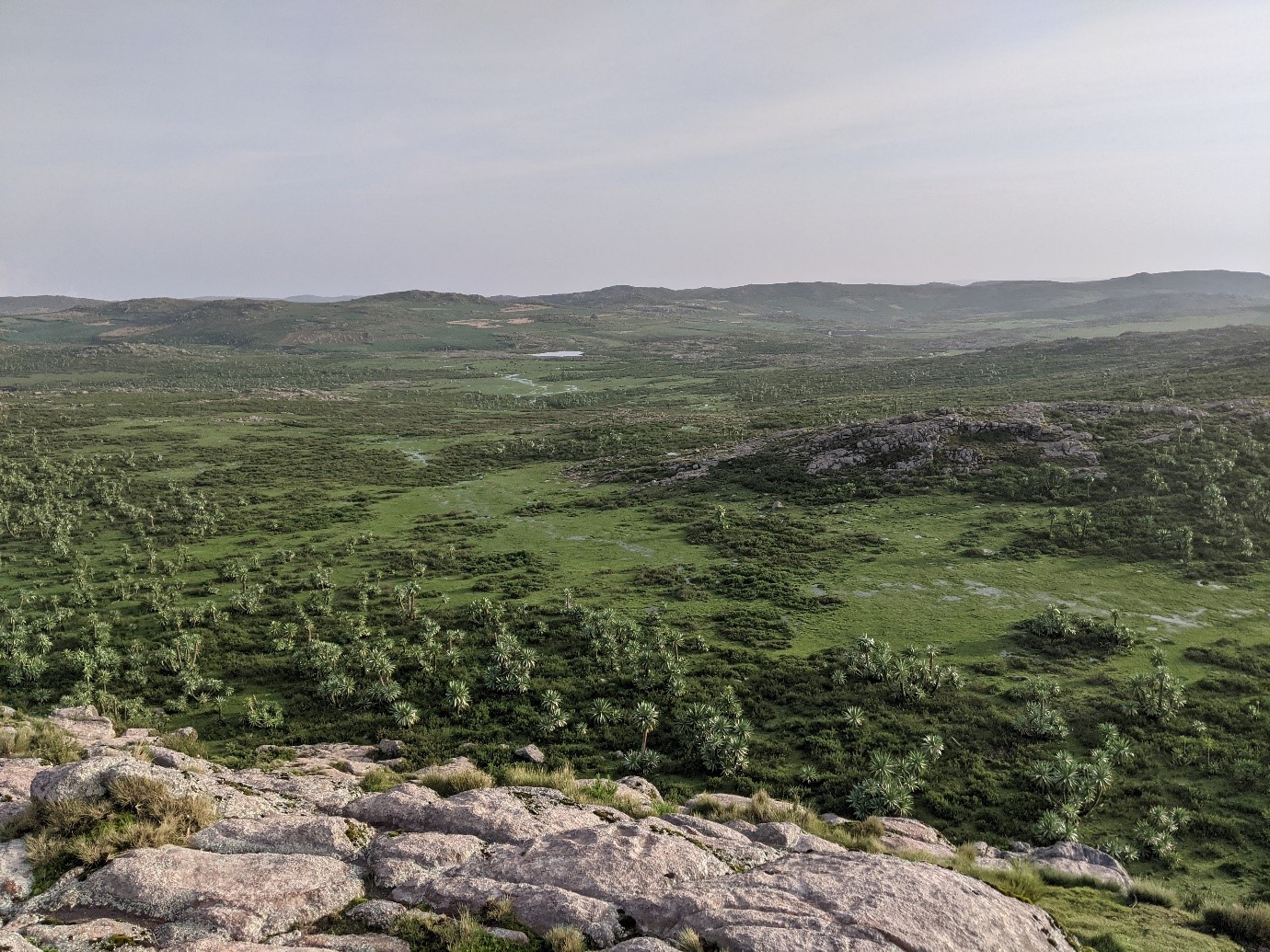 Thanks to all WCN supporters and to Misrak Seyum, Girma Eshete, Fekadu Lema, Dessiew Gelaw, Sindew Zewdu, Mengistu Birhan, Getachew Assefa and Jorgelina Marino for their hard work under the rain.